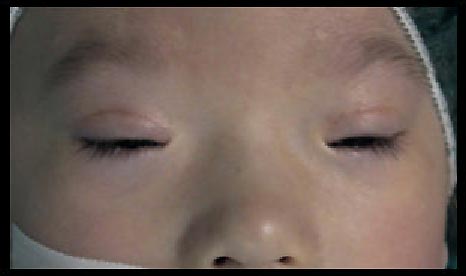 Eyelids play the important role of protecting the eyeball. The bulb's "generic" covering is taken care of by opening and closing the eyelids. These movements also allow correct corneal lubrication and maintenance of the lachrymal film, thus uniformly distributed on the whole surface.
Besides, eyelids automatically protect us from light excess and foreign bodies that might accidentally hit the bulb. When this happens palpebral movement helps us drive the annoying intruder away.
When the eyelid is "faulty" all these duties are only partially or hardly carried out. To make understanding of this problem easier we normally speak of eyelid margin malposition. Obviously the latter only represents the final portion of the structure, but, in the majority of cases, along any eyelid defect, goes a margin malposition. Along the margin grow the eyelashes, which may be affected by the altered eyelid/bulb ratio and therefore show an unusual orientation.
Eyelid margin malposition can show many different ways. The eyelid's bending arch may not correspond with that of the eyeball. This can concern either the vertical or he horizontal axis. To this group belong epicanthi and telecanti, in which the eyelid doesn't line the eye bulb perfectly thus giving rise to "curtain" effects, mainly in the nasal portion.
The eyelid can show a contracture of its margin, which causes an internal (entropion) or external (ectropion).rotation of the eyelashes. This quite annoying condition can, in the long run, cause corneal traumas. Besides all these, there can be congenital indentations of the eyelid margin, the so-called colobomas.
In case of "blepharophimosis" instead, the eyelid margin is shorter than it should be, thus affecting lateral vision. These are quite rare cases that may be part of a more complex clinical picture (blepharophimosis syndrome).
The eyelid might not be sufficient to cover and protect the eyeball due to either congenital or acquired conditions. In hyperthyroidism eye bulb protrusion is due to swelling of extrinsic muscles within the orbital cavity rather than to insufficient eyelids. When it is possible to avoid operating at orbital level, eye coverage and consequently patients' appearance can be improved by lengthening the retractile structure of both eyelids by means of surgery. Last but not least, traumas often lead to residual scarring and consequent palpebral defects. Burnings are among the most frequent cause of eyelid margin distortion. Burns, in fact, create severe cicatricial retractions in an area very difficult to treat by means of physical therapy. Car accidents complicate eyelid heeling process mainly because of substance loss from stab wounds and foreign bodies (glass or mould) retained within the tissues. Furthermore, an anomalous eyelid position may also follow a surgical procedure. The original operation could have been performed for oncologic problems, to correct a misfunctioniong, or for aesthetic reasons. Scleral show is indeed a rather common complication in cosmetic surgery, if, during inferior blepharoplasty, an excessive amount of skin is resected. When the eyelid looses its intrinsic elasticity this results in its downward bending, granting the eye a cocker spaniel look.
Many of the above mentioned conditions can be corrected by means of orbito-palpebral surgical strategies. These operations are generally quite light on the patient, but require a careful diagnosis on the surgeon's side. Due to the delicacy of the tissue to be treated and to the uniqueness of the structures that cannot be found in any other parts of the body, it is advisable to hit the spot at the first trial. Any secondary operation is likely to be more complex. During the pre-operative consultation the surgeon will give you any technical detail you wish to know. Orbito-palpebral surgery represents quite a difficult topic. The simplest approach consists of making use of schematic drawings that illustrate how to repair the defects. Pictures of other analogous cases before and after correction can also come in handy for a better understanding