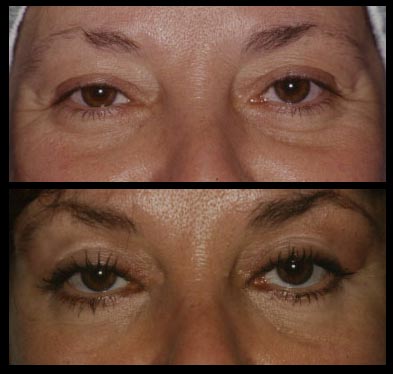 Eyelids can show early signs of old age, fatigue and even metabolic disorders. Being very delicate structures they can prematurely suffer from stress through which our body undergoes. This is the reason why the orbital area seems particularly affected by these signs in young patients as well. The upper eyelids play an important role in our face as a whole and tend, with age advancement, to get heavy and change the shape of the eye and consequently it’s expression. The lower eyelids, instead, tend to thicken because of the adipose pseudohernias called bags, and exactly according to the characteristics of these “bags” are the rings around the eyes emphasized.

Such imperfections can be surgically corrected by removing a lozenge of skin to get rid of tissue excess. At the same time bags under the eyes can be eliminated when they are caused by tissue hernias. The operations do not leave any marks because the skin is incised along the eye-lash border. These surgical procedures are called ancillary because not serious and can be carried out under local anesthesia. For this reason hospitalization is not necessary and post-operatory convalescence doesn’t give rise to many inconveniences and in a period of seven days one can represent oneself in public without showing evident marks of the operation that has taken place.

One of the most important moments of the correction is surely the classification of the defect. As a matter of fact, the “curtain effect” which concerns in particular the lower eyelid doesn’t always depend on the palpebra but on the slackening of the eyebrow. In this case the surgeon will explain which alternative operations could regive light to the eye’s look without operating directly on the eyelid but on the contrary bringing the eyebrow back to the position where it was before. The concept is always the one to carry out corrections totally in respect of the physical anatomy in order to achieve a natural effect. In the specific case of the “ptosis of the eyebrow” the skin is stretched after an incision is made along the hairline in order that marks or scars which can be seen by others are not left on the surface of the face. A blefaroplastic operation does not modify the shape of the eyes. In order to change the eyes’ slant several factors should be considered: the orbital frame, the eyebrow characteristics and the palpebral ligaments. In particular cases the rima palpebrarum may be modified. It’s an operation that concerns the eyelid only indirectly and of which we are happy to give further details in case you could be interested.

Sometimes the eyelid remains in a lower position than normal for problems connected to the elevator apparatus. In this case the defect doesn’t depend on skin excess. Therefore it is necessary to classify correctly the cause of the “ptosis” to give a true surgical indication. Often, the correction of the defect which could be monolateral or bilateral, congenital or acquired consists of the shortening of the palpebra elevator muscle.