This operation is intended to improve your breast appearance. A big breast is not always a sign of beauty and attractiveness. In fact, with time, gravity-pull-related problems" may alter its shape and projection. A voluminous breast doesn't merely represent an aesthetic problem, but can cause discomfort, being responsible of back/lumbar pain and of annoying irritation at submammary groove level, above all in the warm seasons (intertrigo). A reduction of the mammary volume will solve all these inconveniences, besides it will grant the breast a better appearance and will allow wearing a wider variety of clothes. The kind of correction must be carefully evaluated case by case , while considering all the possible variations of shape, volume and projection that will lead to a better balance and harmony in relation to the other parts of the body.

In the chapter of reduction mammaplasties many different techniques were described. All the procedures have in common the removal of part of the inferior pole of the gland and the repositioning of the areola/nipple complex so as to re-establish a normal breast volume and shape. The residual gland, as well as the skin, are carefully repositioned so as to limit the scars to a minimum. There are particular (very rare) cases where the areola-nipple complex needs to be displaced and reset into a new position.

These solutions are to be adopted only in the case of severe gynecomastia, while in the majority of cases it is enough to move the areola-nipple complex joined to its vasculo-nervous peduncle, in order to avoid vascularization and sensitivity problems. The gland is preserved, and, thanks to a "surgical re-tacking" redistributed, thus granting a prosperous appearance to the breast in spite of its reduction in weight and volume. 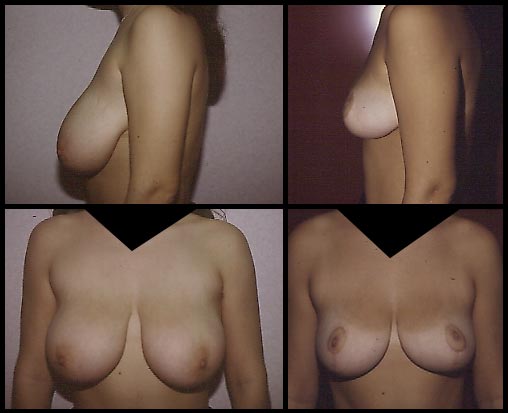 Post-operatively we can normally observe:

- a scar all around the areola, scarcely visible, due to the difference in color between the skin of the areola and that of the rest of the breast
- a scar running into the submammary sulcus, covered by the mamma itself
- a vertical scar connecting the first to the second one, that will show only when topless

All these scars will tend to fade within 4-5 months and blend in with the surrounding skin, but the process takes time.
Unfortunately, it is not always easy to conciliate the exigency of having the least amount of residual scars with that of reaching a good final shape. Therefore a compromise needs to be found and all the details will be discussed with the patient pre-operatively. Should, in spite of this, the scars be too evident, they will be removed under local anesthesia, no earlier than one year after the primary operation.

Duration of the procedure

The operation will take approximately 3 hours.

The procedure is performed under general anesthesia.

According to the chosen procedure, the patient will be hosted in the clinic 1 or 2 days.